It’s the 9th annual National Drive Electric Week (NDEW)! More than 300 events—mostly throughout the United States, but also in a growing number of locations around the world—will offer consumers a chance to learn about, test drive, and even buy an electric vehicle. Undoubtedly, electric vehicles (EVs) are surging in popularity right now. It’s a trend that shows little sign of slowing down.

There were already more than 1 million EVs on the road in the U.S. by the end of 2018. By 2030, that number is forecast to reach nearly 19 million, according to a report from the Edison Electric Institute. Similarly, Bloomberg New Energy Finance’s 2019 Electric Vehicle Outlook notes that annual EV sales totalled just a few thousand in 2010, and reached more than 2 million globally last year. BNEF forecasts global annual EV sales to hit 10 million by 2025 and 28 million by 2030.

Delivering against the green promise of EVs

Nearly two-thirds of prospective car buyers in America have interest in electric vehicles (EVs), according to a recent survey from Consumer Reports and the Union of Concerned Scientists (UCS). Not surprisingly, some 73% say that EVs can help reduce oil use and 72% believe EVs can help reduce pollution. Those are both true statements. But how much cleaner can EVs become vs. their internal combustion engine counterparts? UCS and others, including us here at WattTime, have looked at the emissions associated with charging EVs on various grids—some with more polluting fossil-fueled generation and others with more clean renewably-generated electricity. The good news is that, relative to the U.S. light-duty fleet average fuel economy of 22 MPG, EVs are cleaner everywhere.  But it turns out that EVs can be even cleaner, and sometimes, much cleaner. 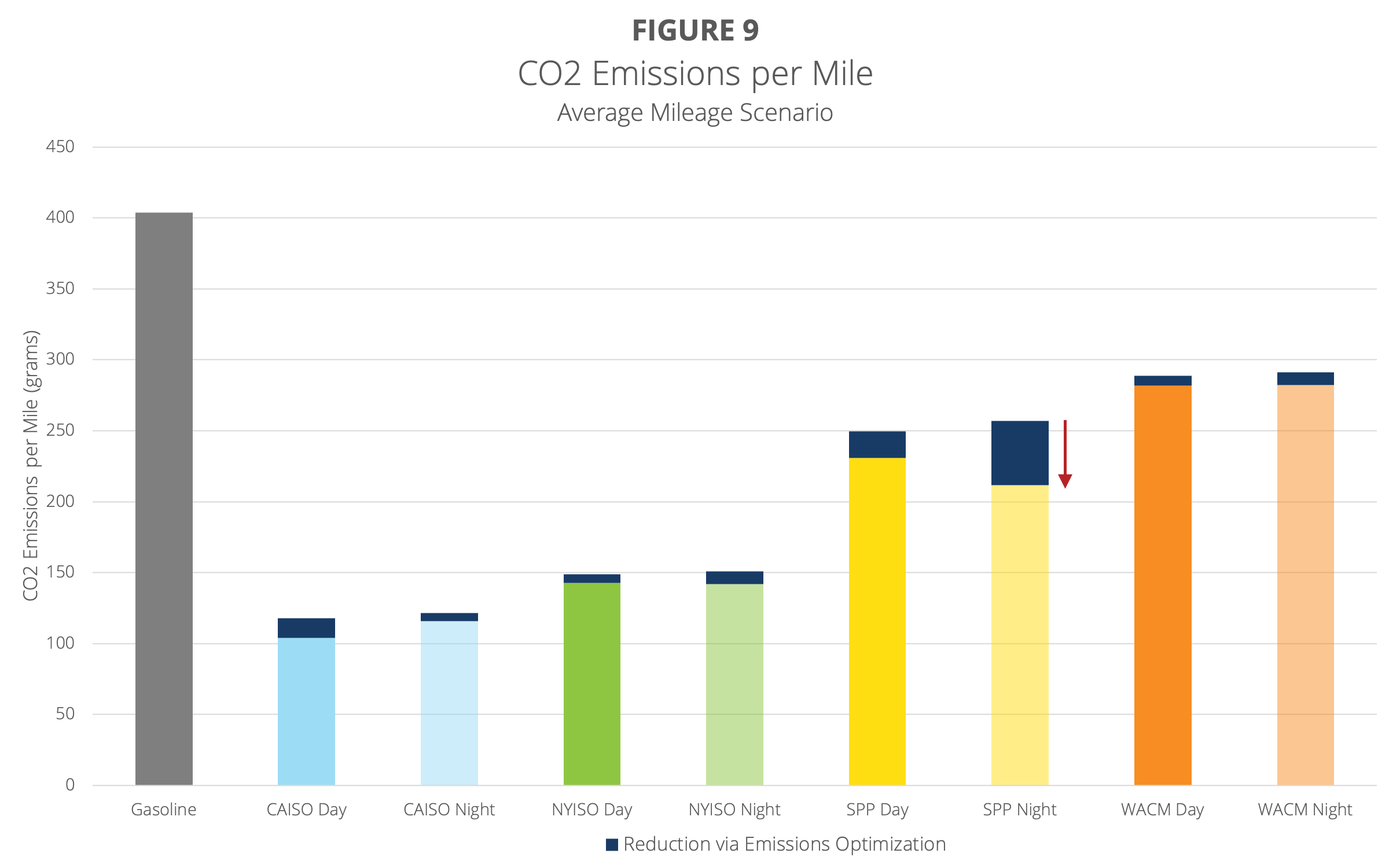 At a time when annual changes in overall electricity demand are pretty much flat (thanks in part to the effectiveness of energy-efficiency programs), EVs represent a unique source of new demand for utilities and our power grid. Meanwhile, it’s pretty much common knowledge that from coast to coast we’ve been rapidly adding more and more renewable energy to the power grid. These two forces present a golden opportunity for EV charging.

First, as we add more renewable energy to electricity grids that are transitioning away from their legacy fossil-fueled generation, we’re seeing stronger and stronger variation in emissions rates from the grid. Sometimes the grid is cleaner, and sometimes it’s dirtier, depending whether polluting power plants or clean renewables are making up the mix.

Second, with new demand from EVs, every time you plug in an EV charge, the electricity grid has to ramp generation up or down to account for that change in load. But what power plants are responding? Does the utility have to turn on an inefficient, heavier-polluting, fossil-fueled peaker plant? Is surplus wind or solar generation being thrown away because there isn’t enough demand at that moment to absorb the emissions-free electricity?

With the right kind of insights into real-time grid conditions—and the ability to send that information via software signal to EVs—they could time their charging to sync with moments of clean electricity and avoid moments of dirty energy, making EVs cleaner than they already are. 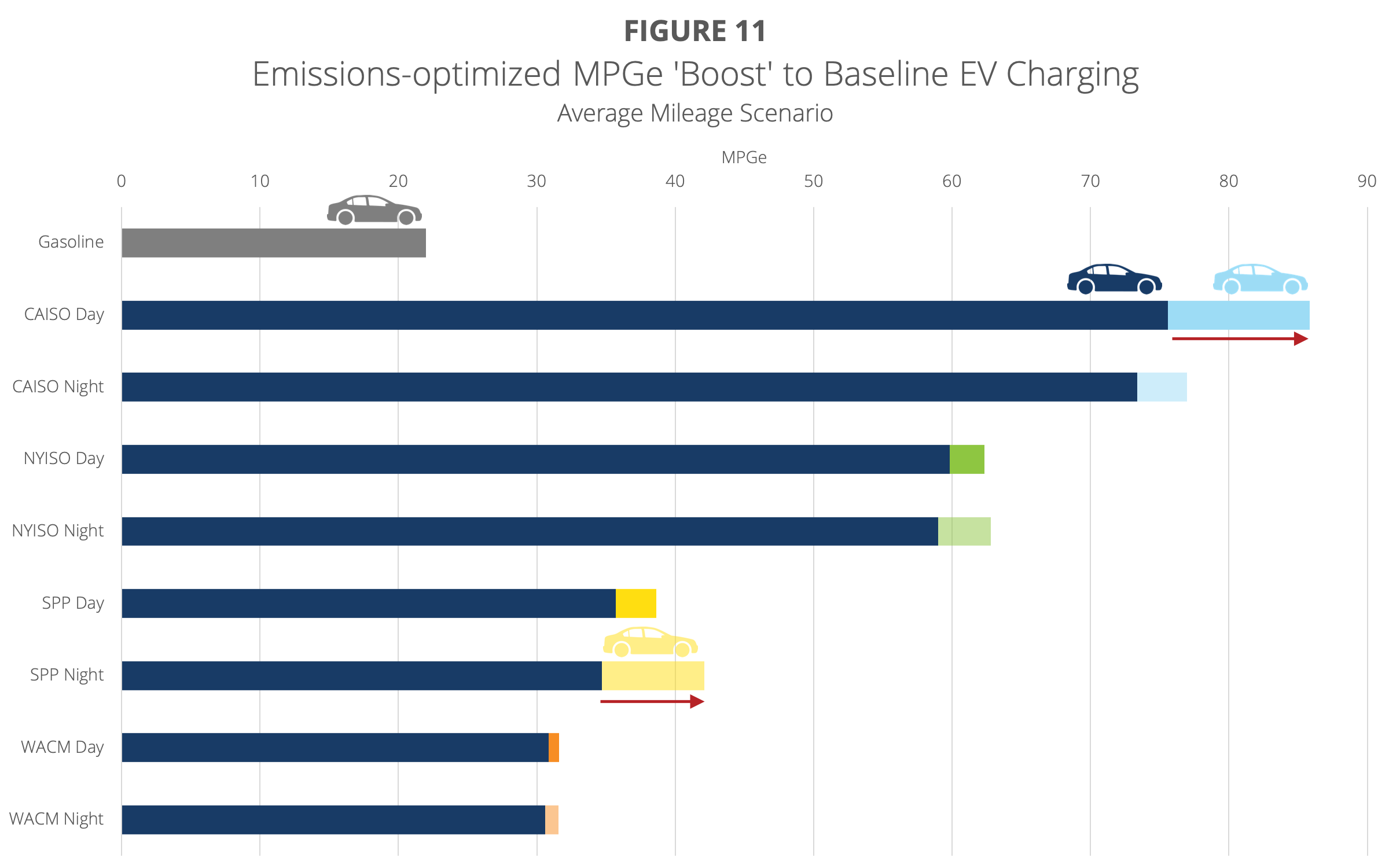 Just on the eve of this week’s NDEW, we released a new report that analyzed the emissions-saving capability of smarter EV charging. We looked at four representative grids across the country, and two common charging scenarios: daytime workplace charging and at-home overnight charging. Our findings were nothing short of exciting. Using an emissions-optimized charging cycle, such as WattTime’s Automated Emissions Reduction software, EVs could become up to 20% cleaner annually and 90% on individual days… incredibly through nothing more than smart software that modulates when an EV starts and stops charging within its allotted charge window (while still leaving you with a full battery, of course).

This is a gamechanger for EVs. Without ever touching their already-superefficient powertrains, it’s like giving them a big MPGe boost. They can drive just as far, but with fewer associated grid emissions. Which in the end delivers on one of the big reasons why drivers flocking to EVs in the first place: they’re green.  Now, they can be greener still. With EV awareness on the rise—thanks in part to  high-profile events such as NDEW—it’s good to remind drivers that EVs are a solid bet for reducing your eco footprint. With emissions-optimized charging, that bet can pay ever higher returns.