Once upon a time, when renewables produced a negligible amount of electricity and fossil-fueled power grids were essentially “always dirty,” adding new renewable energy wherever and whenever was a reasonable strategy. You could be more or less assured that your new renewable generation would be displacing emissions from a polluting power plant somewhere.

But we’re increasingly seeing that when renewables generate their electricity is beginning to matter, and sometimes a lot. The coincident timing of tons of daytime solar PV generation is behind California’s infamous Duck Curve. Likewise, coincident timing is also behind ERCOT’s curtailment of surplus overnight wind generation in Texas and occasional dips into negative wholesale power prices.

(Annual wind curtailment in ERCOT peaked in 2009 around 17%. Transmission expansion helped bring that number down to an estimated ~2% in 2019, but that number was expected to start creeping upward again into 2020 as a large amount of new wind capacity came online at the end of last year.)

Now, a new WattTime analysis shows that the timing and overall generation shape of new renewable energy capacity can have a big impact on the avoided emissions staying power—or not—of various renewable technologies (see Figure 1). This in turn can have a big influence on how rapidly we’re able to decarbonize U.S. electricity grids. 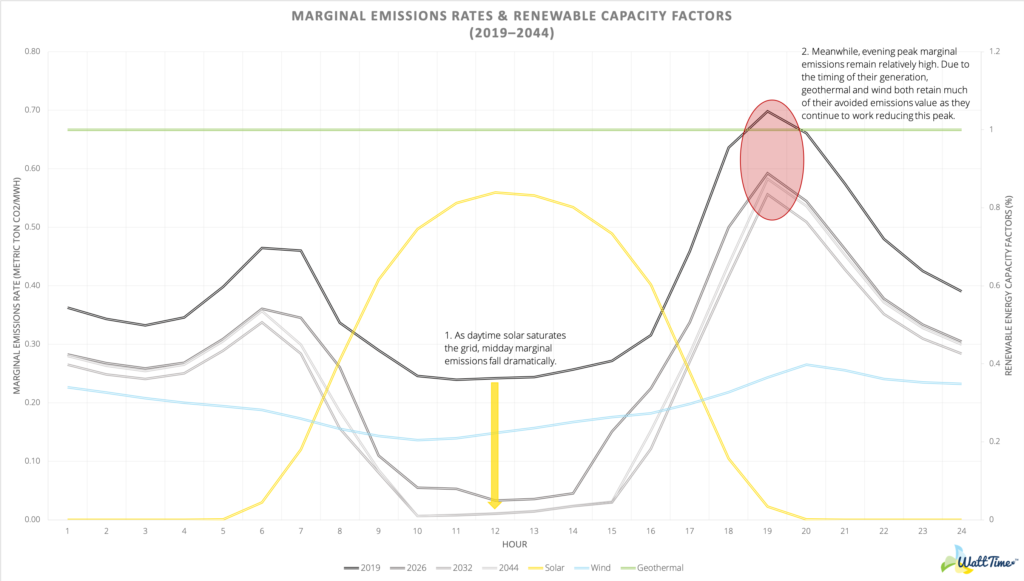 WattTime analysts Christy Lewis and Henry Richardson looked at California’s grid out through year 2044 to better understand the avoided emissions rates of solar PV, wind, and geothermal technologies. In other words, when you looked at the grid’s carbon emissions rate vs. their respective generation shapes, how much emissions would they displace at any given point in time.

Spoiler alert: not surprisingly, the emissions rate during midday hours eventually sunk toward zero, as solar energy saturated the grid. For that same reason, the avoided emissions value of building yet more solar also sunk over time. It was a classic case of diminishing returns. The more that previously installed solar already reduced daytime emissions, the less value adding yet one more megawatt of solar would have for that grid. It’s a kind of merit order effect, only for emissions rather than economics.

On the other hand, when Lewis and Richardson looked at geothermal and wind, they found that both of those renewable technologies had real staying power when it came to avoided emissions. In the case of wind power, it was a byproduct of serendipity. Wind generation in California happens to naturally peak at the same time as grid emissions, so adding more wind capacity continues helping to chop that emissions peak down. For geothermal, it was about its always-on and/or dispatchable nature. Geothermal is able to generate during all those “forgotten,” overlooked times of the day and night when solar and wind aren’t producing. It covers critical gaps in the generation profile of a 24-hour day, and thus also has staying power (see Figure 2).

Is it geothermal’s time to shine in the U.S.?

But although geothermal is small in the U.S. today—and although wind, solar, and storage capture much of the spotlight—geothermal could play a much larger and crucial role in the country’s future electricity system as a vital part of a broader renewable portfolio.

The U.S. currently has about 2.5 GW of operating geothermal capacity. Compare that to a whopping 105 GW of installed wind capacity and 71 GW of installed solar capacity. Some 95% of the geothermal capacity is in just two states: CA and NV. And nearly half the capacity came online in the 1980s. However, that all could change. A 2008 USGS survey identified nearly 40 GW of hydrothermal potential for electricity generation. And half of U.S. states specifically allow for geothermal as an approved way to meet RPS targets.

Like wind, solar, hydro, and other renewable energy technologies, geothermal is a form of emissions-free electricity generation. But that’s about where the comparison to other renewables stops.

For starters, U.S. geothermal electricity production has boasted an average capacity factor around 76%, while newly constructed plants can approach 100%, only furthering the juxtaposition vs. wind and solar.

Second, there’s the issue of generation shape. Because of geothermal’s high capacity factor, some think of it as a kind of always-on baseload renewable generation. Others instead characterize it as dispatchable renewables that can be ramped up or down (without the need to pair it with an energy storage system, as in the cases of wind and solar).

Finally—and to the point of the recent WattTime analysis—there is the matter of avoided emissions, a topic that becomes even more important in the years ahead as the U.S. adds more renewables to the power grid en route to a low-carbon electricity system. Because geothermal can generate electricity pretty much continuously, and perhaps more importantly, because geothermal can produce energy when wind and solar can’t, it retains its avoided emissions value out to 2030 and likely beyond.

Renewables and the climate crisis

As we collectively look ahead to renewable energy project pipelines, there remains the issue of where to build new renewable capacity (a concept WattTime calls emissionality). But increasingly, there will be growing importance on paying attention to generation shapes and when a particular renewable technology can inject clean energy into the grid and help slash the fossil-fueled emissions rate.

This suggests a strong growing role for geothermal and a continued important role for wind, as solar’s diminishing returns on avoided emissions in places like California mean we’ll have to look elsewhere for “getting more of the carbon out” of our power grid. That’s not to say by any means that the sun is setting on solar. It will continue to play an important role in today’s and tomorrow’s electricity system.

But as more grids mature in their transition from fossil fuels to renewables, getting the carbon emissions out of the system as quickly as possible will require a more careful look at when renewables generate their electricity and how much emissions they’re displacing when they do.